The Story of Nori: A Dragon Tale

Once upon a time, not so very long ago, a Children’s Museum and a Chinese dragon moved to Providence.

In 1997, the Museum was preparing to move from Pawtucket to its current building, which housed a printing business in the 1930s and, a little later, jewelry manufacturing.  Prior to the move, the Museum completely renovated the building’s interior, created two floors of imaginative exhibits, and added the atrium walkway, workshop, parking lot and landscaping, all while keeping the building’s historic character.

At the same time the Museum of Fine Arts, Boston was ready to part with a colorful dragon head, originally created for a Chinese painting exhibit by Symmetry Products (located in Lincoln, RI).

And so the dragon came to perch upon the Museum’s rooftop in July 1997. 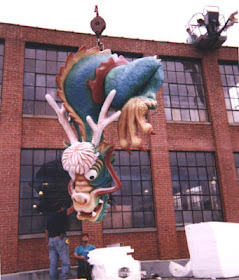 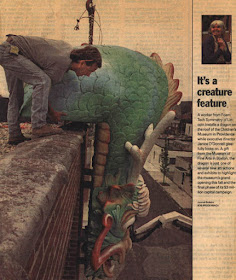 Two years later, Julie Lancia of Symmetry Products volunteered to create a dragon tail to mark the Museum entrance.  In conjunction, the Museum held a “name the dragon” contest.  The new tail was unveiled and the name announced – Nori, suggested by 11-year-old Michael Felmly of Newport.

Although Nori is a Chinese dragon (or lung), Michael named him after a Japanese friend.  The word refers to a kind of seaweed (and a seaweed dish) and Nori is a water creature, as all Asian dragons are – appropriate, as he lives in the Ocean State.  Also common to Chinese dragons, Nori is a benevolent spirit.

After well over a decade of dwelling above the Museum and weathering New England winters, Nori was sorely in need of a makeover.  So, over the last two weeks, Nori got a face (and tail!) lift – repairs and a fresh coat of paint – courtesy of exhibit technician Hillel. 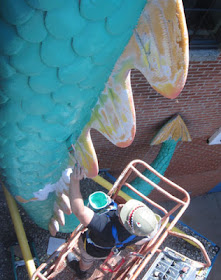 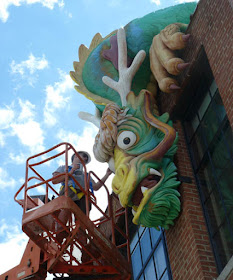 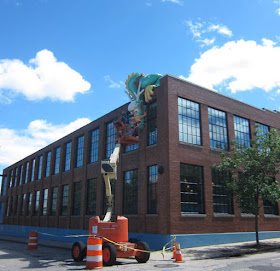 Nori has been beloved by Museum visitors since his arrival and has also become known as a signature Providence landmark. He’s seen a lot in his 16 years at the Museum and undoubtedly has many tales to tell…